Sleep apnea is a type of breathing disorder which is a serious, potentially life-threatening condition characterized by brief interruptions of breathing during sleep. 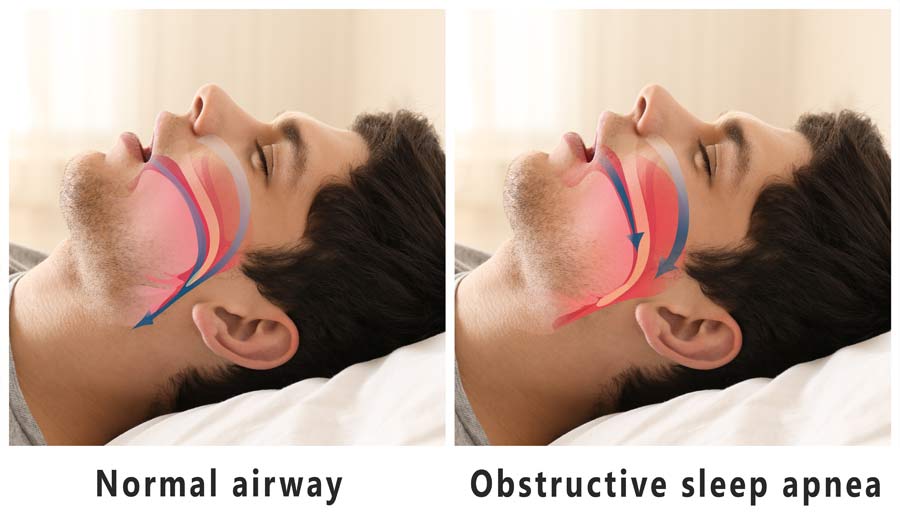 Regardless of type, the individual with sleep apnea is rarely aware of having difficulty breathing, even upon awakening. Sleep apnea is recognized as a problem by others witnessing the individual during episodes or is suspected because of its effects on the body. Symptoms may be present for years, even decades without identification, during which time the sufferer may become conditioned to the daytime sleepiness and fatigue associated with significant levels of sleep disturbance.

THERE ARE BASICALLY THREE TYPES OF APNEA:

The upper airway is open, but no oxygen is getting into the system. This occurs because the patient is not getting a chemical response from the brain to stimulate the lungs and the diaphragm to assist with breathing.

The lungs and the diaphragm are functioning normally, but no oxygen is entering the system because there is an obstruction in the upper airway.

This is a combination of central and obstructive sleep apnea.

Children can also snore and suffer from obstructive sleep apnea. Often they are highly allergic and their airway is blocked due to enlarged adenoids, tonsils or swollen nasal mucosa. Clinical signs would indicate a turned up nose, allergic shiners under the eyes, mucous draining out of the nose, mouth breathing, and a nasal sound to the voice. Other signs are bed wetting, irritability, difficulty in concentrating at school and hyperactivity.

Presently, obstructive sleep apnea is a medical condition and the diagnosis must be made by a medical doctor or sleep physician (pulmonologist). Despite the fact that in September 1995, the American Sleep Disorder Association finally endorsed oral appliance therapy as the third currently acceptable treatment method for snoring and sleep apnea, the vast majority of the medical doctors are not aware of the value of oral appliances.

As time goes on, the public is going to become more aware of the health risks associated with snoring and sleep apnea. It is the dental professionals responsibility to educate their members, the public and the medical profession about the important role that dentists and oral appliances play in the treatment of snoring and obstructive sleep apnea.